The Clos Gaillard, near the French administrative town of Nimes has a story to tell. As early as the third millenium before the Christian era, the area was occupied – perhaps by hunter-gatherers, perhaps by farmers. Traces of human occupation remain from most subsequent periods of history. Fast forward to circa AD 1400 and the area, all 240 hectares of it, was ceded by the local village of La Calmette to the town of Nimes in exchange for a livestock market. The limestone landscape could not support intensive farming but there are fertile depressions among the limestone outcrops allowing for orchards and cereal production. Stone cabins in dome shapes attest to human occupation.

Modern farming developments and related population shifts to urban areas left the area mostly abandoned to scrub forest by the mid 20th century. Then came the fires – here and there – intermittent. After a major fire in 1974 the municipality of Nimes decided to reforest the area. This might have been a mistake because in 1989 a huge fire destroyed about half of the Clos Gaillard forest and many, many hectares beyond (over 600 in total).

This time the reconstruction of the area required a rethink and the result is a modern landscape park, less prone to fire, with more open spaces and many ethnobotanical features. The area contains rehabilitated stone cabins (known as capitelles), several waymarked walking routes, mini arboretums including a substantial collection of almonds and oak varieties, lookout points, educational exhibits etc. Much has been done to keep the site open with firebreaks and thereby favour the return of natural endemic flora (ex corn cockles, wild snapdragon, plantain etc) to an open milieu.

(The above notes about the history of the site are excerpted from this reference). 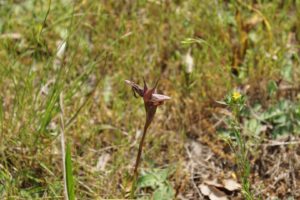 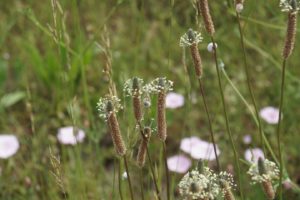 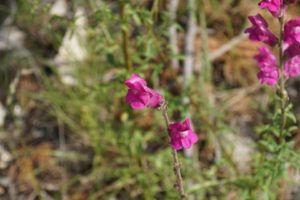 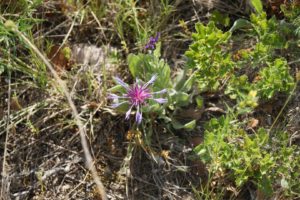 On this day in June, we were not expecting to see much novelty. It was just a stroll to take advantage of a beautiful spring day. We usually walked these routes in winter, but this was the first time in June. We were surprised, primarily by the numerous stations along the route where magnificent lizard orchids stood up to 80 cm tall. The rest of the flora sparkled as well (all pictures taken in Clos Gaillard, June 2021).

Here are the route details and some observation spots.

This site uses Akismet to reduce spam. Learn how your comment data is processed.

This site is about walking, mostly in south central France. South central France means the Cévennes “mountain” range, the Grands Causses area with it’s plateaus and canyons, the departments of Gard with the garrigue landscapes, the Vaucluse, the Herault, sometimes the Ardèche, the Avéyron and the Drôme. There are descriptions of interesting walks, but sometimes also the non-interesting ones. Here there is also a focus on technology – namely the hardware and software you might use while hiking and in particular handheld GPS devices and smartphones. There are also references to cartography both in the field and on the computer screen back home. The progress in the area of web mapping in the past several years, with the arrival of services like Google Maps, Nokia Here (now “Here we go”) and the OSM Open source map service, has been spectacular.

However, hiking in this region is more than just walking with eyes focused forward or concentration on the GPS screen. It’s also about observing and understanding the landscapes, villages, farms, ancient ruins and various geological curiosities. Often the subject of interest is not the “what”, but the “why”. Why did people settle here hundreds of years ago? Why did the ancient trade routes pass this spot?

This site is also for people who like maps. There are maps in nearly every article, often with interactive features. Try them out.

For every walk mentioned in an article, the site provides a downloadable gpx file suitable for use on a handheld gps device. The site provides additional access to a database of some 500 circuits also complete with downloadable gpx. It is worth noting however, that a gpx track is a perishable commodity. Over time waymakings change, land owners block walking routes, obstacles appear. For this reason, when available, dates of the most recent passage on the circuits are also provided. Use with care.

The french word “croix” translates to cross and holds the connotation of the cross as a religious symbol. However, “cross” in english or Kreuz in German have a second meaning – namely crossroad or intersection. “La Croix de Gattigues” uses this meaning and refers to a crossroad in Gattigues at which, no surprise, there is also a fine an iron cross (pictured).