I used a Garmin GPS 64 to record altitudes during a recent hike along the the Vidourle river-mill circuit and compared the recordings to the theoretical altitudes obtained by generating the GPX with an online tool using the IGN basemaps. Here below is a comparison chart.

However, there is still something strange going on. The recorded Garmin altitude, starting from around 3 km in, starts tracking progressively lower than the theoretical altitude. The Garmin data stabilises between 10 and 20 m altitude while in reality, no point on this circuit is below 20-25 m so the Garmin data is incorrect. Is this because the differences are within a margin of error for altitude measurements with a handheld device ? Maybe but if so, why is the tracking much closer for the first 3 km ? 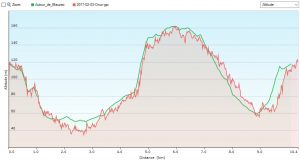 This site, built with WordPress, uses a couple plug-ins for mapping. They are Leaflet Map and WP-GPX-maps.

Leaflet map allows you to display a track on a map background. The plug-in allows for use of OSM maps via MapQuest. To use MapQuest you need to sign up for an API key from their website, and for modest use like this website, the API key should be free. However, I opted not to use Mapquest. This is France and France has the IGN (Institut National de l’Information Géographique et Forestière). This institute publishes folding paper maps at many scales and the 1:25000 scale maps are outstanding for hikers. It seems that every department in the country has a hiking trail plan and these trails are all marked on the IGN maps. One point of warning though. The paper versions are sometimes out of date. END_OF_DOCUMENT_TOKEN_TO_BE_REPLACED

Any attempt to get a good fix on cumulative climbing using GPS devices (handhelds, or smartphones) is fraught with error. Anyone who has used these GPS tracking devices knows that, while longitude and latitude are quite accurate, the altitude measurements at any given point vary from accurate to completely off the mark. GPS chip quality, embedded software and various external factors affect these readings. Walking at the base of a steep limestone cliff will cut out half of the sky and half of the satellite readings. Walking through a wet forest under wet leafy trees degrades the signals too. And there might be times when military services move the geopositioned satellites to serve a military purpose thereby degrading consumer level accuracy. So in this article, I compare a couple different apps to the Garmin GPSMap 64s to see if there are any conclusions. END_OF_DOCUMENT_TOKEN_TO_BE_REPLACED
For 10 years I used the Garmin GPSmap60CSX. I used it with Garmin maps that had no altitude model and then migrated to the new altitude based maps. In south-central France, these maps were pretty accurate. The device was sturdy too, but I finally gave up on it when the clip holding the map chip in place broke and it was no longer easy to keep the chip in place under the batteries. A small piece of cardboard folded into an accordeon shape usually worked, but every time I changed the batteries, the chip came loose. It came loose if bumped while hiking too. This became a non starter after a while.

So I switched to a newer version – the 64s. What’s new with this one ? A new menu system that took time to get used to. A new desktop software package – Basecamp – that also took some time after giving up on Mapsource. The maps no longer transfer to the desktop, unless the device is tethered. There is a new compass that needs less calibration. The device seems to be more accurate and gets a faster fix on position possibly due to the use of both GPS and Glonass satellite clusters. There are new maps with a different rendering style in Basecamp – not better – just different.
END_OF_DOCUMENT_TOKEN_TO_BE_REPLACED

For every walk mentioned in an article, the site provides a downloadable gpx file suitable for use on a handheld gps device. The site provides additional access to a database of some 500 circuits also complete with downloadable gpx. It is worth noting however, that a gpx track is a perishable commodity. Over time waymakings change, land owners block walking routes, obstacles appear.  For this reason, when available, dates of the most recent passage on the circuits are also provided. Use with care.